Many contemporary scientists believe it is the underlying state of our physiological processes that determines the quality and stability of the feelings and emotions we experience. The feelings we label as positive actually reflect body states that are coherent, meaning “the regulation of life processes becomes efficient, or even optimal, free-flowing and easy,”and the feelings we label as “negative,” such as anger, anxiety and frustration are examples of incoherent states. It is important to note, however, these associations are not merely metaphorical. For the brain and nervous system to function optimally, the neural activity, which encodes and distributes information, must be stable and function in a coordinated and balanced manner. The various centers within the brain also must be able to dynamically synchronize their activity in order for information to be smoothly processed and perceived. Thus, the concept of coherence is vitally important for understanding optimal function.

The various concepts and measurements embraced under the term coherence have become central to fields as diverse as quantum physics, cosmology, physiology and brain and consciousness research. Coherence has several related definitions, all of which are applicable to the study of human physiology, social interactions and global affairs. The most common dictionary definition is the quality of being logically integrated, consistent and intelligible, as in a coherent statement. A related meaning is the logical, orderly and aesthetically consistent relationship among parts. Coherence always implies correlations, connectedness, consistency and efficient energy utilization. Thus, coherence refers to wholeness and global order, where the whole is greater than the sum of its individual parts.

In physics, coherence also is used to describe the coupling and degree of synchronization between different oscillating systems. In some cases, when two or more oscillatory systems operate at the same basic frequency, they can become either phase- or frequency-locked, as occurs between the photons in a laser. This type of coherence is called cross-coherence and is the type of coherence that most scientists think of when they use the term. In physiology, cross-coherence occurs when two or more of the body’s oscillatory systems, such as respiration and heart rhythms, become entrained and operate at the same frequency.

Another aspect of coherence relates to the dynamic rhythms produced by a single oscillatory system. The term autocoherence describes coherent activity within a single system. An ideal example is a system that exhibits sine-wavelike oscillations; the more stable the frequency, amplitude and shape, the higher the degree of coherence. When coherence is increased in a system that is coupled to other systems, it can pull the other systems into increased synchronization and more efficient function.

For example, frequency pulling and entrainment can easily be seen between the heart, respiratory and bloodpressure rhythms as well as between very-low-frequency brain rhythms, craniosacral rhythms and electrical potentials measured across the skin. 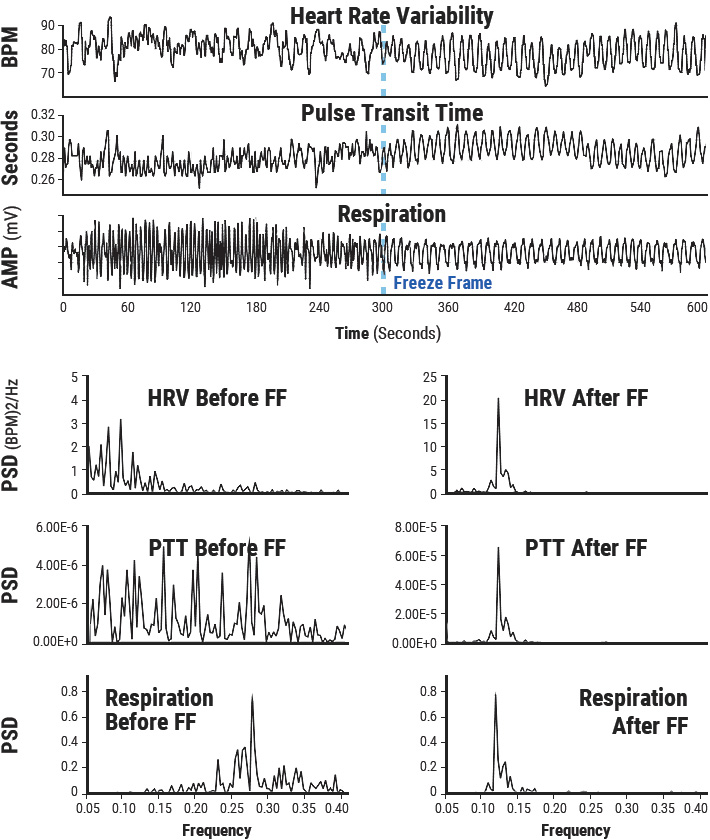 The top graphs show an individual’s heart rate variability, pulse transit time and respiration patterns for 10 minutes. At the 300-second mark, the individual did HeartMath’s Freeze Frame Technique and all three systems came into entrainment, meaning the patterns were harmonious instead of scattered and out of sync. The bottom graphs show the spectrum analysis view of the same data. The left-hand side is the spectral analysis before Freeze-Framing. Notice how each pattern looks quite different from the others. The graphs on the right show how all three systems are entrained at the same frequency after Freeze-Framing.